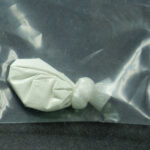 A baggie of white powder was sold in Boston, MA as heroin, but actually contains MDMB-4en-PINACA, fentanyl, caffeine, lidocaine, and 4-ANPP. The sample was submitted from Boston, MA.

The sample turned light orange in the presence of the Marquis reagent, and fizzed but did not otherwise react with the Mecke and Mandelin reagents. A BTNX Fentanyl Test Strip produced a positive test when used by the sender.

MDMB-4en-PINACA is a synthetic cannabinoid that is an NPS (New Psychoactive Substance) that recently entered the black market. Little is known about its toxicology profile and effects in humans; however, the sender of this sample indicated feeling “out of body… speedy, jittery”. It is not possible to immediately discern which of these effects would likely have been caused by caffeine as opposed to MDMB-4en-PINACA. However, anecdotal reports indicate that the inclusion of this substance in heroin bags has led to increased overdose incidents in Massachusetts (police reports describe erratic and sometimes violent behavior that is inconsistent with typical heroin overdoses, leading to confusion when attempting to treat patients on-scene). Synthetic cannabinoids as a class are sometimes known for producing effects that are similar to cannabis itself, but with increased levels of stimulation and dissociation, sometimes leading to life-threatening blood pressure spikes. Users often report unpleasant withdrawal symptoms following prolonged use – it’s important to note that synthetic cannabinoids are not the same as cannabis.

Caffeine is the world’s most widely consumed psychoactive substance. It produces stimulation for approximately 4-6 hours, with standard doses of approximately 70 to 150mg.

Lidocaine is typically used to adulterate cocaine and other substances where a person might try to determine the contents by gumming; as a topical anesthetic, lidocaine has numbing properties that may emulate the numbing of cocaine. It is not, however, intended to be consumed orally, and can induce vomiting and other potentially dangerous side effects if swallowed.

4-ANPP is a manufacturing intermediate of fentanyl (specifically, an impurity).