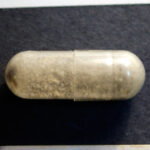 A capsule of tan powder was sold in San Gabriel, CA as psilocybin but actually contains methamphetamine, ketamine, MDA, 2C-B, ergosterol, methylsulfonylmethane, and psilocybin. The sample was submitted from Redondo Beach, CA.

Methamphetamine is a powerful stimulant with known neurotoxic properties, particularly concerning the function of dopamine neurons (responsible for reward, motivation, and motor control). Methamphetamine induces feelings of grandeur, increased sociability, decreased need for sleep, increased heart rate and blood pressure, and increased motor activity. Individuals with heart conditions or high blood pressure may be at risk for hypertensive crisis when using methamphetamine or other stimulants. Additionally, powerful stimulants are capable of prompting compulsive use; for these reasons, informed consent is particularly important when consuming a substance such as methamphetamine.

Ketamine is a dissociative anesthetic commonly used in human and veterinary medicine. At lower recreational doses, it induces feelings of lightness and sensations comparable to drunkenness; at higher doses, it can cause profound psychedelic experiences and temporary loss of motor control. Ketamine is typically snorted, rather than consumed orally.

MDA is a compound with a similar effect profile to MDMA; however, MDA is often cited as being more physically stimulating, slightly less empathogenic, more psychedelic, and very slightly longer in duration.

2C-B is a psychedelic substance with an extremely sensitive dosage scale. It is often described as causing physical sensations that are slightly similar to those of MDMA (“rushing” or “electricity”). At lower doses, 2C-B is generally considered to be more body-high oriented, while higher doses are frequently paired with substantial visuals. 2C-B has approximately the duration of psilocybin mushrooms (4-6 hours) and often a less mentally intensive high.

Ergosterol is a molecular compound found in fungi with a function that is similar to that of cholesterol in humans. It is often implied in antifungal properties of some medications.

Methylsulfonylmethane is a dietary supplement.

Psilocybin is a classic psychedelic compound that is typically found in mushrooms, and only very rarely extracted into powder form. Generally speaking, “powdered psilocybin” is actually either a lab-synthesized analog such as 4-ACO-DMT or a different kind of drug altogether. Psilocybin’s effects last approximately 4-6 hours and are known for including psychedelic visual imagery, thought processes, and sometimes spiritually significant experiences.

This combination of wildly different substances, each with highly unique properties and some with profoundly stimulating effects, will have unpredictable impacts on the consumer’s body and mind. It is likely that such a combination of empathogenic/entactogenic, stimulating, anesthetizing, dissociating, and psychedelic drugs would drastically sensitize sensory information and increase both heart rate and blood pressure. If ingesting a similar conflation of drugs, harm reduction measures include informing others of the contents of the sample and the location of consumption, checking pre-existing medical history to evaluate the risk of potentially dangerous increases in blood pressure and heart rate, and preparing a space with a sober tripsitter to minimize risk of accidental harm while altered.

We urge our community to keep in mind that drug markets are expansive and that this adulterated psilocybin capsule may appear in places other than its source and submission location. Using a reagent test kit can help provide a first line of defense as a presumptive (and not affirmative) process. Additionally, samples may be sent in to www.ecstasydata.org for in-depth laboratory testing. Test before you ingest to avoid taking misrepresented substances, and so you can adjust your intention, set, and setting appropriately to minimize risks. You can purchase your DanceSafe test kit here.

A baggie of green powder was submitted to EcstasyData.org from Knoxville, TN. The powder was sold as MDMA, but... read more

Join us on Sunday, April 10th, 2016 for our 1st Annual DanceSafe FundRAGER! Our vision brings the community together... read more

According to this ecstasydata.org submission published on February 28, a crushed red/orange/brown pill was sourced as a ‘Pink Chanel’... read more

Join The Untz and DanceSafe!

DanceSafe is a non-profit and thus exists solely on donations. In order to reach as many people as possible,... read more

The Simplest Thing You Can Do to Advance Better Drug Policies

By: Mikayla Hellwich I have a lot of friends who care about progress and want to be part of social... read more

It's #TestItTuesday! Ecstasydata.org has added a submission from SaferParty, a harm reduction organization in Zürich, Switzerland. The sample was... read more

International Overdose Awareness Day is a Day to Remember, Reflect, and Take Action