We have identified 7 Reasons to Amend The RAVE Act. Return here every Wednesday for the next 7 weeks to learn more about why we must Amend The RAVE Act! Help us make a difference by sharing and supporting the campaign. Together we can improve the health and safety of our community!
Click here to sign a petition to tell Vice President Biden to Amend the RAVE Act and save lives!

What is Amend The RAVE Act?

The Reducing Americans’ Vulnerability to Ecstasy Act, or the RAVE Act, was first introduced in 2002 by then-Senator Joseph Biden. The bill was renamed and passed the following year as the Illicit Drug Anti-­Proliferation Act. The RAVE Act expanded the “crack house” laws established in the 1980s to include temporary venues.  As a result, festival and other event producers could face criminal and civil charges if they were found to be “knowingly maintaining a drug-involved premise.”

So what does it mean to “knowingly maintain a drug-involved premise?”

The original lawmakers apparently intended for the measure to be directed at event producers who were actively involved in selling drugs.  However, the law has been interpreted by many event producers (and their lawyers and insurance companies) to mean that basic safety measures (i.e. free water, cool down space, drug education materials, even the presence of DanceSafe!) “prove” that they know drug use is present, and make them vulnerable to prosecution under the RAVE Act.

The purpose of the Amend The RAVE Act Campaign is to clarify that venue owners and event producers will not be subject to criminal or civil prosecution for implementing basic safety measures as a means to reduce medical emergencies, including those associated with drug use. However, we cannot do this alone. The Drug Policy Alliance and DanceSafe need your help! Help make a change by signing this petition to encourage Joe Biden to make things right.

7 Reasons to Amend The RAVE Act 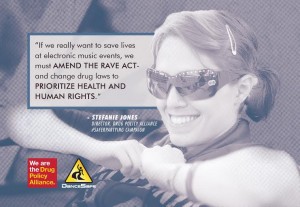 The bigger picture of the Amend The RAVE Act Campaign prioritizes the health of both festival and venue patrons. It’s past due that we place health and safety at the center of the conversation. As stated above, The Drug Policy Alliance is a key stakeholder in regards to current policy affecting the electronic music and nightlife communities. Specifically, its Music Fan Program seeks to Amend The RAVE Act as a component of its larger #SaferPartying Campaign. 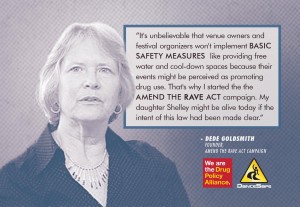 On August 31, 2013, Dede’s daughter, Shelley, died of heatstroke at an electronic music event in Washington, DC after taking MDMA.
Shelley was an honors student at the University of Virginia. She loved life and was an inspiration to all those who knew her. Her death was not an overdose. Rather, it resulted from a combination of MDMA and dehydration after dancing for hours in a hot, overcrowded environment, which ultimately led to hyperthermia or heatstroke. It can happen to anyone. In fact, fatalities are increasing at nightlife events and music festivals across the country.

Too many young people are dying, and the 2003 RAVE Act is part of the problem because it is preventing the implementation of common sense safety measures at these events. It is time for a “safety first” approach to drug use that emphasizes harm reduction alongside current law enforcement efforts. 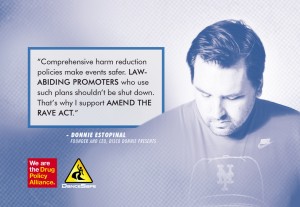 Donnie Estopinal, known as Disco Donnie, has been throwing parties and festivals since the early 90s. He was one of the first event promoters unfairly targeted under the federal “crack house” statute. Today, he seeks justice by supporting the Amend The RAVE Act Campaign.
4. Integrated harm reduction 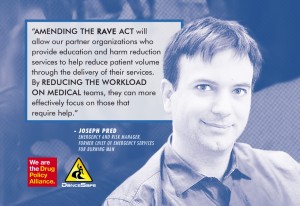 Joseph Pred founded Black Rock City’s Emergency Services Department and started as a Burning Man staff member in 1996. Previously, he has served as Chief of Operations for Black Rock City’s 911 system, including fire, rescue, EMS, clinical services, communications system, 911 dispatch center, and mental health services. His complex and diverse background lend to his expertise in the field and his understanding and support of integrated harm reduction. 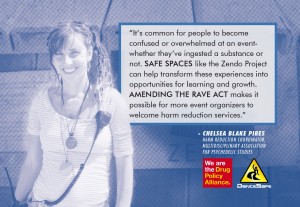 As stated on their website, “The Zendo Project provides a supportive environment and specialized care designed to transform difficult psychedelic experiences into valuable learning opportunities, and even potentially offer healing and growth. In turn, [their] work reduces the number of drug-related hospitalizations and arrests.

[They] envision a world where communities are engaged in providing safety and support for people having psychedelic and psychological challenges; and harm reduction principles are used foremost to reduce the risks associated with substance use.”

6. Message and educate about safer drug use 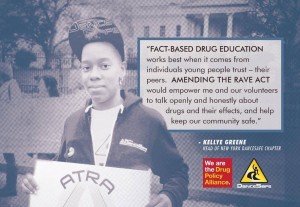 DanceSafe neither condones or condemns drug use rather we take a non-judgemental approach to create a safe space for people to openly talk about safer drug use. Guided by our fundamental principle of harm reduction, DanceSafe recognizes that humans will naturally engage in risky behaviors (i.e. engaging in sex or drug use) and aims to mitigate the associated risks. Every drug contains inherent risks and no drug use is safe. The intent of providing a safe space to openly discuss drugs is not to provide a false sense of security but instead to provide the knowledge and resources necessary for our community to make informed decisions for themselves.
7. Drug checking and early alert system 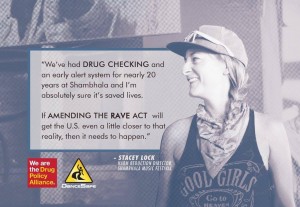 Drug checking is a harm reduction service that helps people avoid ingesting unknown and potentially more dangerous adulterants found in street drugs. However, best practices tell us that this is not enough. The next step is to implement an early alert system. The purpose of an early alert system is to alert the community to highly adulterated of misrepresented substances in the community. After nearly 15 years at Shambhala Music Festival, it’s clear this practice saves lives.

DanceSafe would like to take an opportunity to show our gratitude to Nemo Alcazar and the members of  the... read more

In light of the recent whirlwind of discussion regarding consent and sexual abuse within the electronic music community, DanceSafe... read more

DanceSafe would like to thank Ms. Carissa Cornwell for the 15+ years she has given to the organization and... read more

It's #TestItTuesday! Today, we are discussing LSD and drug checking in honor of Bicycle Day tomorrow and also offering... read more

Using ketamine can be fun, and recent studies have shown it to have antidepressant effects. (1) But using it... read more

A participant from Boulder, Colorado has notified DanceSafe that a white powder with “some chunks” was sold as ketamine,... read more

A round, white pharmaceutical style tablet with “RP” on one side and “10 325” on the other was sold... read more