On the final day of Future Music Festival Asia (FMFA), I found myself sitting in a traffic jam with various members of the press, ten blocks from our hotel. Massive traffic pileups might be normal for Kuala Lumpur on a Saturday, but something seemed off. For the last two days, our press brigade had been shuttled back and forth between our hotel and the festival venue by a (largely symbolic) six-motorbike police escort. Today, they hadn’t arrived.

It turns out that the authorities were busy shutting down the entire show. Due to six drug-related deaths (allegedly from methamphetamine overdoses, although there have been several conflicting reports about the substance in question), the last—and biggest—day of FMFA had been called off. According to Malaysia’s New Straits Times, 29 others were arrested over the first two days for drug charges.

The impact of this cancellation cannot be underestimated. FMFA in Malaysia has grown to become one of the biggest EDM festivals in this part of the world, with ticket sales jumping from 15,000 to 85,000 since its inception in 2012. A large chunk of concertgoers come from abroad—mostly Singapore, Indonesia and Australia. But large international crowds were all part of the grand vision of Iqbar Ameer, a Malaysian national and former Australian club promoter who now works for Livescape Asia, the events management company that produced FMFA along with Australia’s Future Music Group.

Now, Iqbal and a representative from Future Music were standing in a buzzing media center looking visibly distraught. In an extremely brief press conference, he read a statement that had appeared on FMFA’s Facebook page just minutes before. “In the interest of public safety we have heeded the authority’s advice not to proceed with day three,” he said. In a nutshell: show’s over, folks.

It’s standard practice (and probably a good idea) to cancel a festival like this in the event of serious safety concerns—but it’s nonetheless a shame, because day one and two of FMFA provided a fascinating insight into EDM culture in Southeast Asia. So before I spend the next 24 hours at the hotel bar having to pay for my drinks, I took note of the things I learned about EDM in Malaysia from FMFA.

“In the US EDM is about everything being big, everything being mega-huge-and-now-what’s-next,” Iqbal told me during an earlier (and happier) interview. In comparison, Australia’s own sound is both a bit harder and more progressive, which explains why Will Sparks absolutely blew apart the main stage on day one. “Australians are stubborn, they’re less fashion orientated. If they like it, it goes,” Iqbal added. Which also explains why Will was DJing in his underwear.

BUT ADVENTURE CLUB ARE CANADIAN, AND THEY’RE PRETTY DAMN GOOD 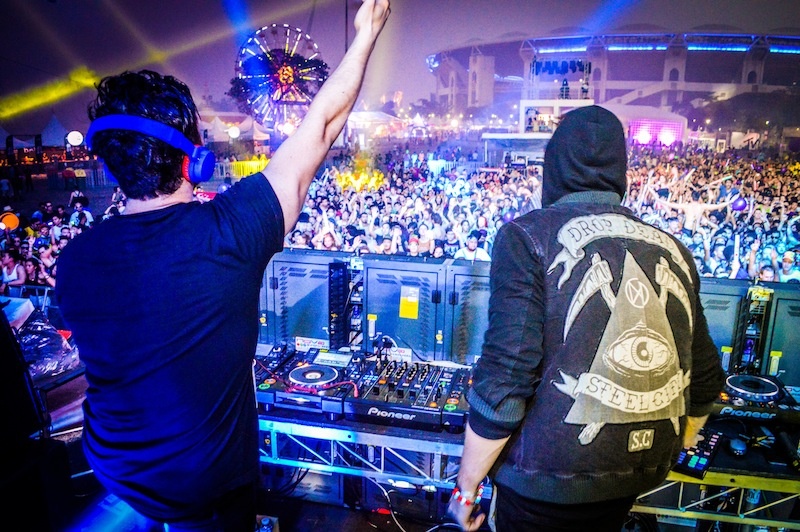 Adventure Club was probably the best act I saw at the festival. The duo hails from Canada—another newly EDM-ized nation—and started out as a rock group, like Skrillex and Zedd. They’re relatively new on the international circuit, and while the turnout at the beginning of their set suggested they’re still relatively unknown in Malaysia, the hysterical crowd at the end (people were literally in tears when Christian stage-dived) suggests they’re going to be a regular fixture here.

MALAYSIAN DJS HAVE A STEEP HILL TO CLIMB 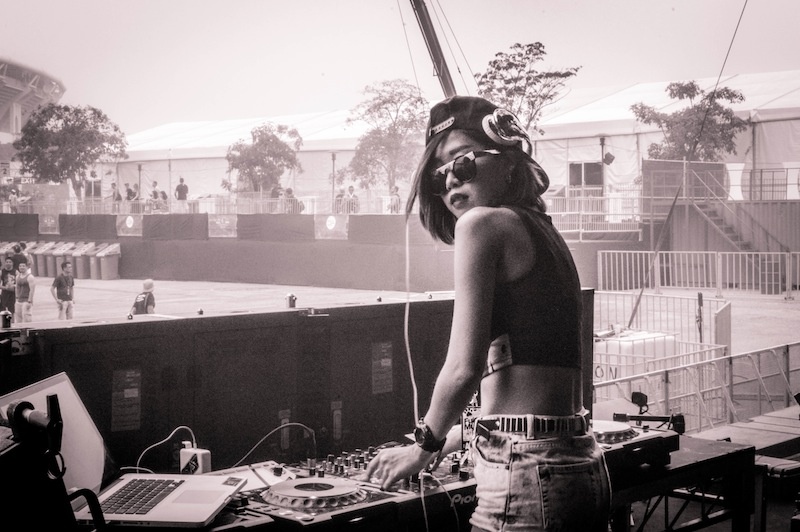 EDM is sort of like the English language. It has transformed the world of electronic music by creating a common lingo that brings together distant acts and venues. It’s also made it easier for new producers and listeners to engage with each other. But now, EDM is so prolific that it’s harder for native electronic cultures to grow organically. Props to FMFA for making a conscientious effort to address this, bringing in Malaysian acts and treating them with the same level of importance (dressing rooms, riders, press slots, flyer mentions) as everyone else on the roster. But it seems like Malaysia’s DJs still have much room to grow. For example, Eva T, considered one of Kuala Lumpur’s top DJs, played a tight set, but has yet to branch into production—now arguably the fundamental driver for an artist’s success. 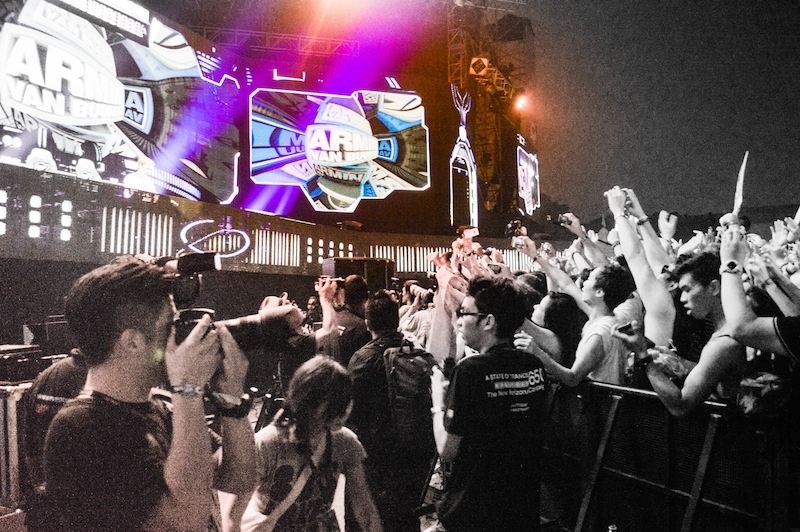 Southeast Asia regular Armin Van Buuren dominated day two with his legendary A State of Trance showcase—an all-day affair that included fellow heavy-hitters Markus Schulz and Paul Van Dyk. So even though there appeared to be more hysteria for acts like Will Sparks and Adventure Club, the arena was at its busiest—the pyrotechnics, smoke, and soundsystem at full blast—for Armin and his legion of trance dudes.

THE MEDIA’S FEEDING FRENZY IS PART OF THE PROBLEM 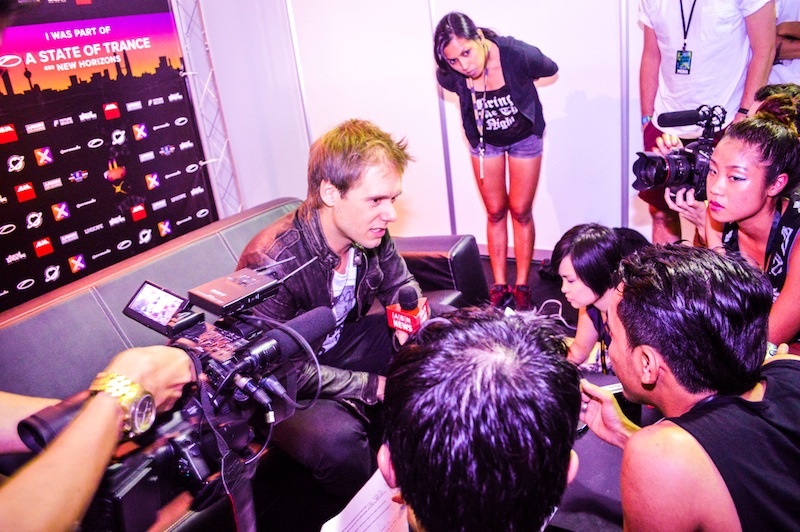 The gap of international visibility that exists between Malaysian DJs, EDM upstarts and the old guard is felt out on the main stage to an extent. But it’s no where more clear than in the press room. Festivals are not only where artists make their money—it’s also where they get their next gig and push their name further out there. sadly, I was the only journalist interviewing Malaysia’s Eva T, one of two for Adventure Club, and one of twenty for a press conference with Armin Van Buuren. For some reason which even Armin seemed confused by, everyone just wanted to ask questions about his infant son. The media’s side-stepping of smaller names in favor of asking the big fish silly questions will only exacerbate this divide. 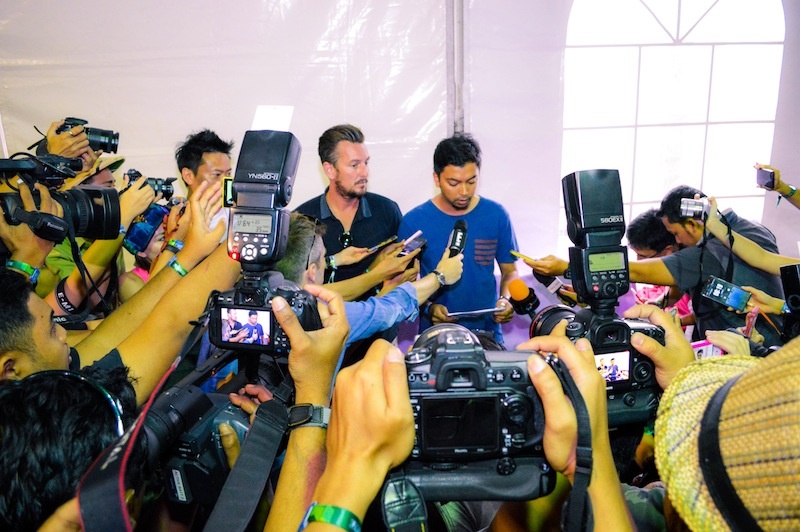 There’s no skipping around this. Day three was supposed to be the climax of FMFA, with Pharrell, Rudimental, Knife Party, Macklemore and Ryan Lewis, and Eric Prydz (who under normal circumstances doesn’t play anywhere he has to fly to) all confirmed as headliners. While drug-related deaths at festivals are (unfortunately) not uncommon, what made this news feel especially surreal was how entirely at odds it felt to my experience at the festival. I’ve travelled around Croatia and done serious time at London warehouses, so I’m accustomed to dancefloors where half the occupants are swapping shots for dabs, bumps or snorts.

But FMFA’s drug scene was different: we didn’t find any. In fact nobody in the crowd seemed particularly drunk. Back at the hotel room at 5AM, hunched over the thousands of photos I took, there were none of the usual telltale “Wow, look at that dude’s eyes…” shots. Security at the event was tight too. Searches on the entrance, no re-entry, even US-style no-drink, no-loiter zones.

These were drug-related deaths, and the fledgling Malaysian EDM scene will suffer heavily for it. What makes it all the more tragic was that this simply was not a particularly substance-saturated festival.

NEVERTHELESS, WE’LL BE BACK

Malaysia’s exchange rate, geography, and its growing creative class put it in the perfect position to carve a name for itself in the EDM world. There are questions to be asked about how emerging communities use and respond to EDM. The bottom line is, however, that for the two days it ran, the festival appeared to have the charisma, the crowd and the energy, to ignite a much-larger scene. If it’s on next year, we’re going.

The DanceSafe Staff and Board are thrilled to announce the addition of Rachel “Sputnik” Clark to the DanceSafe National... read more

Let’s Celebrate Freedom When Drugs Are Decriminalized (at the Least)

Today, we celebrate America’s 241st birthday. As many would say, we are celebrating freedom. Freedom and liberty and democracy--all... read more

Myth: Alcohol, as a Nightcap, Helps You Sleep Better

It is commonly thought that a drink or two before bed--a nightcap, if you will--helps one sleep better. While... read more

SOLD OUT – A DanceSafe and COSM joint fundraising blotter art!

THIS LIMITED EDITION BLOTTER IS NOW SOLD OUT, THANK YOU FOR YOUR SUPPORT! Just in time for the holidays, DanceSafe... read more

A round cyan blue “M 30” pill sold as Oxycontin submitted from Calexico, CA, but sourced in Mexico tested... read more

By: Rachel Clark, DanceSafe Contractor A capsule of tan powder was sold in San Gabriel, CA as psilocybin but actually... read more